Maybe you were raised in a similar family (but probably not). If so, your Grandfather was a farmer from the old country who utilized nearly every square foot of his plot of land for flowers and vegetables. To him, horticulture was a science that required no teaching. It just came natural. So well in fact, his house was shown in Better Homes & Gardens magazine in the 60s. True story.

So let’s take it to the next generation. Your father would have what I call “landscaping OCD.” Not quite an illness, but an all-consuming urge to make the lawn look like Yankee Stadium and the flower beds look like the Botanical Gardens. I’d imagine this would be what nicotine addictions for smokers are like.

So where does that leave me? Shit. I can’t top that. But what I can do is try, and if lucky enough, I can get recognized with a Buffalo in Bloom designation, something my suburban family members can’t get – no matter how hard they try. Each year in the city, a troop of garden scouts troll the neighborhoods looking for well-manicured streetscapes. Standout front yards are given a B-I-B tag to proudly accompany their garden art. It’s like wearing the Captain’s “C” or getting a key to the city. I wonder if Terrell Owens ever got bloomed? 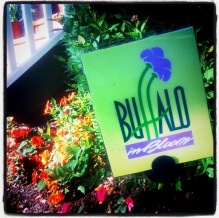 2012 was our first full summer in our new house.  Call it our inaugural planting/gardening season.  After removing layers of bark chips, I began to cultivate the unfruitful beds by adding a solid mixture of top soil, Michigan Peat, compost and 5-10-5 fertilizer. 48 impatiens, a hosta and a daylily later, we had enough curb appeal to earn the coveted tag.

This year, it’s on. It was an active offseason for me, as I was scouting potential additions to the front and back yard. Beyond the return of perennial performing flowers, new prospects include a Japanese maple tree and a purple rhododendron. Time and the landscaping salary cap will tell but Vegas has us at 3-1 odds to repeat as Buffalo in Bloom recipients. 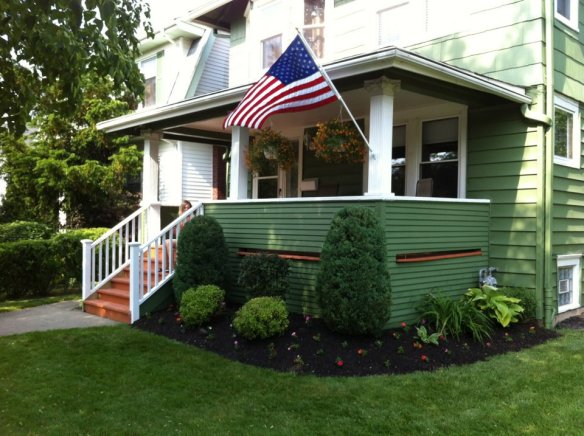 5 thoughts on “Get BLOOMED!”