One of the appeals of living in North Buffalo, or the city in general for that matter, is being immersed in the beauty and charm that comes with the 100+ year old houses.

We truly love our 1910 house with all its history and character and curb appeal.

So last year, when our friend Julia sent us a holiday card with a drawing of her house on the cover, we were impressed (and maybe even a little envious). Obviously, at that moment Karen and I both decided it was imperative that we have a drawing of our house done at some point as well.

Here’s where the funny part of the story comes in. I acted quickly and enlisted the services of Karen Matchette, the artist who drew Julia’s house. Our house on Saranac was precisely drawn, double matted, framed and wrapped in August – a solid four months ahead of Christmas! Surely a record for me.

Fast forward to last week, and Karen starts snooping around for the same person’s contact information to have the same drawing done for my Christmas gift.

We are sooo soulmates aren’t we? It was definitely cute that we both had great intentions for the same holiday gift, but it did add an element of stress. In Julia’s frantic attempt to preserve my surprise while staying a loyal friend to both of us, she did the only thing she could do and lied to my wife. Mysteriously, as the story went, the artist upped and moved of town last month.

Yea, not really, but it seemed plausible.

Karen didn’t let it stop her and she immediately reached out to another artist in town who does similar work in her own style – Dana Saylor. Given that I knew Karen was hot on the trail to get this gift for me I pulled an audible and gave her the intended Christmas gift on her birthday Friday. Here’s how it turned out: 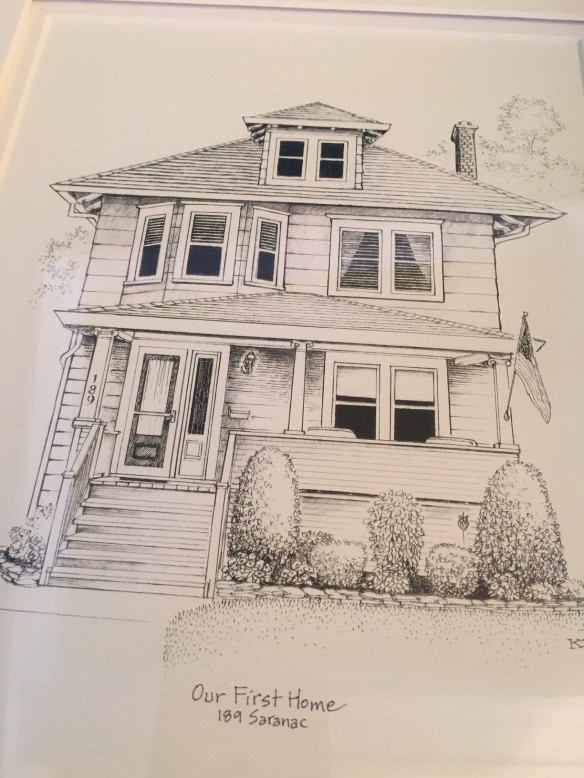 She loved it. We love it. Then we laughed about our parallel journeys toward getting this done. Then we immediately reached out to Dana with an apology and a request to rip up the check she’ll soon be receiving. Then we hung it up. Then we wrote this blog.

In the end, we have a permanent commemoration of our first home that will hang on our wall for years to come. Should we ever leave this old, beautiful house, it’s great to know that, through this picture, it will always be with us no matter where we are. And you as a reader, now have two wonderful references should you wish to have this done for your house! 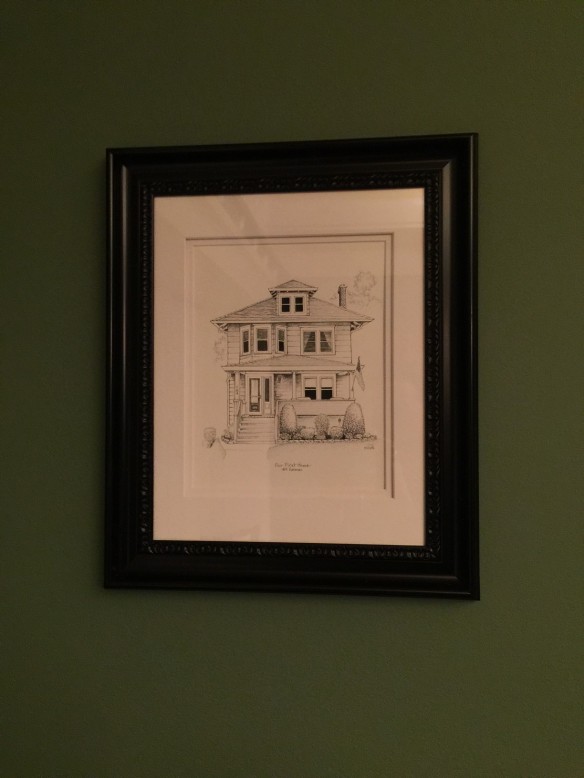 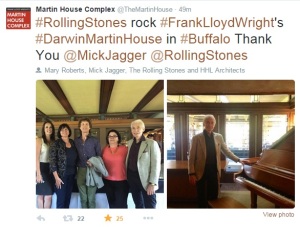 For it is in this historic neighborhood, at the conjuncture of Jewett Parkway and Summit Avenue that Frank Lloyd Wright’s celebrated Darwin D. Martin house stands in all its glory. 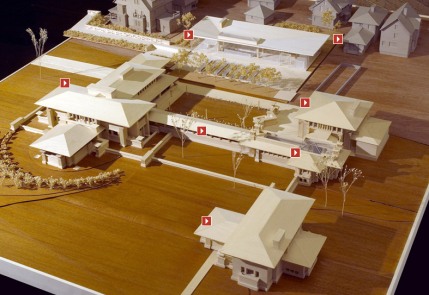 Completed in 1907 (yes, nineteen-o-seven), the six historic structures spread over a sprawling 29,000 square feet exemplify Frank Lloyd Wright’s philosophy about organic architecture, and his now-famous quote “form and function are one.”

But there is more to the Darwin Martin House than meets the eye. Behind this perfect-prairie facade lies the dedication and hard work of volunteers – almost 400 of them. They could be serving as your docents or chaperones, helping you pick out a souvenir from the beautifully curated pieces of the museum gift store, or simply fluffing the cushions in the main living room (Frank Lloyd Wright cushions, pretty big deal!). 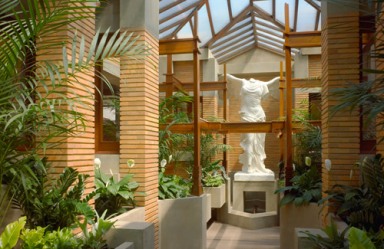 As a new volunteer at Darwin-Martin House myself, I can first-handedly vouch for the appreciation that the board and the staff has towards all of their volunteers. Be it the Director of Volunteers agreeing to chat with me for the blog, proudly beaming when telling me that her volunteers are the face of this organization and the most rewarding aspect of her job; or the Director of Retail Operations giving me a tour of the gift shop, narrating the story of every single art piece or souvenir that he offers in the store – it does not take long for one to realize why 400 people devote their time to this Buffalo monument (after all we do have a lot of options). 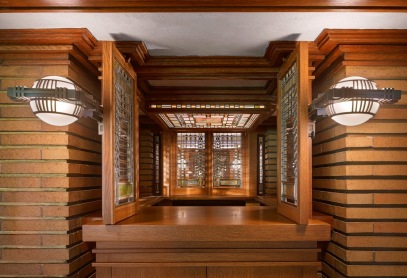 So next time when you are on the tour, look beyond the architecture. Stop by the museum store to chat with the retail-store volunteers, ask your chaperones and docents for their stories. I promise you will not be disappointed!

Special thanks to Angela Laviano-Hamister and Joseph Incao for their precious time and cooperation.

Frank Lloyd Wright’s Darwin Martin House is currently in Phase V of an expansive restoration project estimated to cost $50 million, out of which $40 million has already been raised.

I just completed the Grand Slam – conquering the Italian Fest all four days.

Yes, I have it easy being just a one block stroll away. But that didn’t appear to stop those that needed to bike or drive their way in. Nor did the weather on Saturday, which still drew a good crowd despite the rain.

As an Italian-American who grew up on so many of the foods and traditions shared at the fest, it’s a great source of pride for me to have the Italian Festival located in North Buffalo – where I call home, and, according to the latest census, more Italian-Americans call home than any other neighborhood in Western New York.

While North Buffalo today is a great conglomeration of people – a melting pot for sure – it’s nice to have the focus on one of the main cultures that helped shape the neighborhood.

To the residents of North Buffalo: you are fine hosts. It’s not a small ask of a neighborhood to close their streets and open their doors so-to-speak to 200,000 visitors. And yet, we wrap up another successful year of showing off “il nostro quartiere e la cultura”. (Google it)

To Campi’s Pizza and Romano’s Bakery: your welcome – I made a significant contribution to your bottom line this week.

To the North Park Theatre: nice touch with showing Italian movies all week!

To The Public House of Buffalo: thank you – your new spot served as a safe haven from the rain on Saturday and your staff, atmosphere and beer list gave me 72 of reasons to come back.

All in all, I couldn’t be happier with the direction the festival keeps heading with each year seemingly bringing more and more Italian traditions and culture to the forefront. There’s so much more to our heritage than just the typical foods and songs everyone can name, and I think that’s really starting to show at the fest.

Can’t wait for next year! Ciao!

There I was, sitting in a local cafe in downtown Rochester, flanked by my Buffalo regalia, reading an old and crumpled Artvoice (I had been in Rochester for ten days) when a gentleman approached me and exclaimed, “It’s an amazing city, your Buffalo. Too bad I never got an opportunity to live there.”

“Yes, indeed. It is a gem of a city!” After graciously thanking him, I went back to my coffee date with the crumpled Artvoice.

Two minutes later, the gentleman came back, “So where did you say you live in Buffalo?”

“I see, where in North Buffalo?”

“Hertel Avenue, it’s one of the oldest neighborhoods of Buffalo.”

“Oh, how fascinating. So what’s the history of this place?”

As these words escaped my mouth, so did my North Buffalo pride.

Obviously, this blog post is an effort to nurse my wounded Pride and to give all of us NoBu’s a glimpse of Hertel’s past. 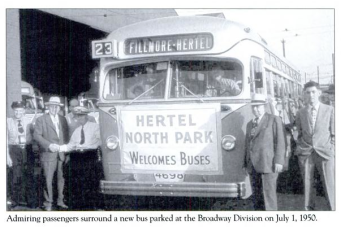 Stretching for four miles from Niagara Street to Main Street across North Buffalo, Hertel is named for John Stephen Hertel, former County Supervisor from the old twelfth ward. North Buffalo, and Hertel Avenue owed their habitation to the invention of automobiles around the 1900’s, becoming home to many Italian Immigrants who moved from the deteriorating lower west side of Buffalo (the Canal District), along with many Russian Jews, who relocated to Hertel Avenue from their original neighborhoods in the 1930’s. 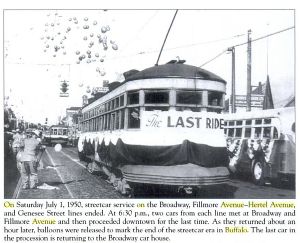 With the people, came their culture. Hertel Avenue became a hot spot for shopping, dining and entertainment. During the early 20th century, trolleys were a major source of transportation for Buffalonians- and these tracks crisscrossed Hertel. People came to shop and dine at places like Van Slyke’s Pharmacy and Klaiber’s Delicatessen. 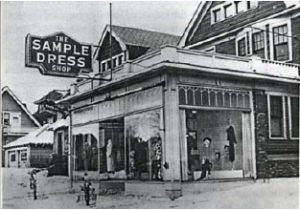 One of the most famous businesses that Hertel Avenue ever saw was “The Sample Dress Shop” opened by Anne Bunis at 1635 Hertel Avenue in 1928. The store catered to women’s clothing and other fashions, and saw tremendous success, thanks to its excellent marketing strategies which included dropping brochures from airplanes throughout the city, and their immensely popular Pup Sale, which was considered one of the most coveted sales event by Buffalo shoppers. 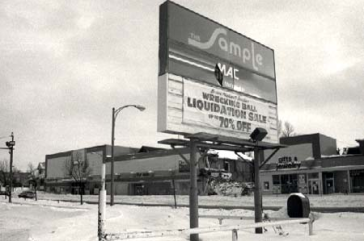 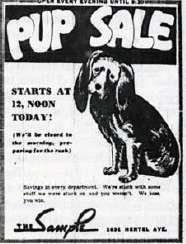 While The Sample Dress Shop was definitely a feather in the crown of Hertel Avenue, North Park Theater was its crowning glory. Built in 1920, as a part of Shea’s chain of theaters, designed by architect Henry L. Spann, the building was adorned by a grand pipe-organ and Tiffany lights which have since been removed. The theater’s ownership has passed from Shea’s to Dipson Theaters to its present owners, who recently restored the theater to its formal glory, and reopened the crown jewel of Hertel to its people.

This sums up the history of Hertel, friends! So next time when someone asks about this fascinating neighborhood of yours, go ahead and share the glory. You are welcome 🙂

This blog post is first in the series of blog posts which aim to shine light on aspects of Hertel – which are unique to this neighborhood. Stay Tuned for more!