Confession: We have lived in our North Buffalo home for four years now and in that time, how many times have we ordered a pizza from somewhere on Hertel? ZERO.

There are two main reasons for such an appalling stat:

After hearing a friend talk about a Kenmore Pizza Crawl they just completed, I said to Charlie it was the perfect time to tackle something like this for Hertel.

If you live in North Buffalo, I’m sure you’re reading this thinking, “Oh man, she better think _________ is the best.” So as not to offend anyone’s pie preferences or local business owners for that matter, I’ll refrain from getting too specific.

For me, based on my preference for spicy sauce, thicker crust and adequate cheese coverage (unlike most Buffalonians I don’t get giddy over a cheese blanket on my pizza), my favorite was Avenue. Charlie’s preference would be Bob & John’s. Without the ability to talk, our one year old gave two thumbs up to all of them.

Are Avenue or Bob & John’s good enough to cause us to throw in the towel at Bocce’s and Franco’s? Guess you’ll just have to see where our car is parked come Superbowl Sunday. 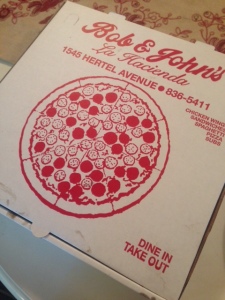